Hello, I’m MJ. I’m an emo kid, have been for close to a decade now.

This article started as a joke, after a friend of mine Jhariah posted this on Twitter (go follow him he’s an incredible musician and artist): 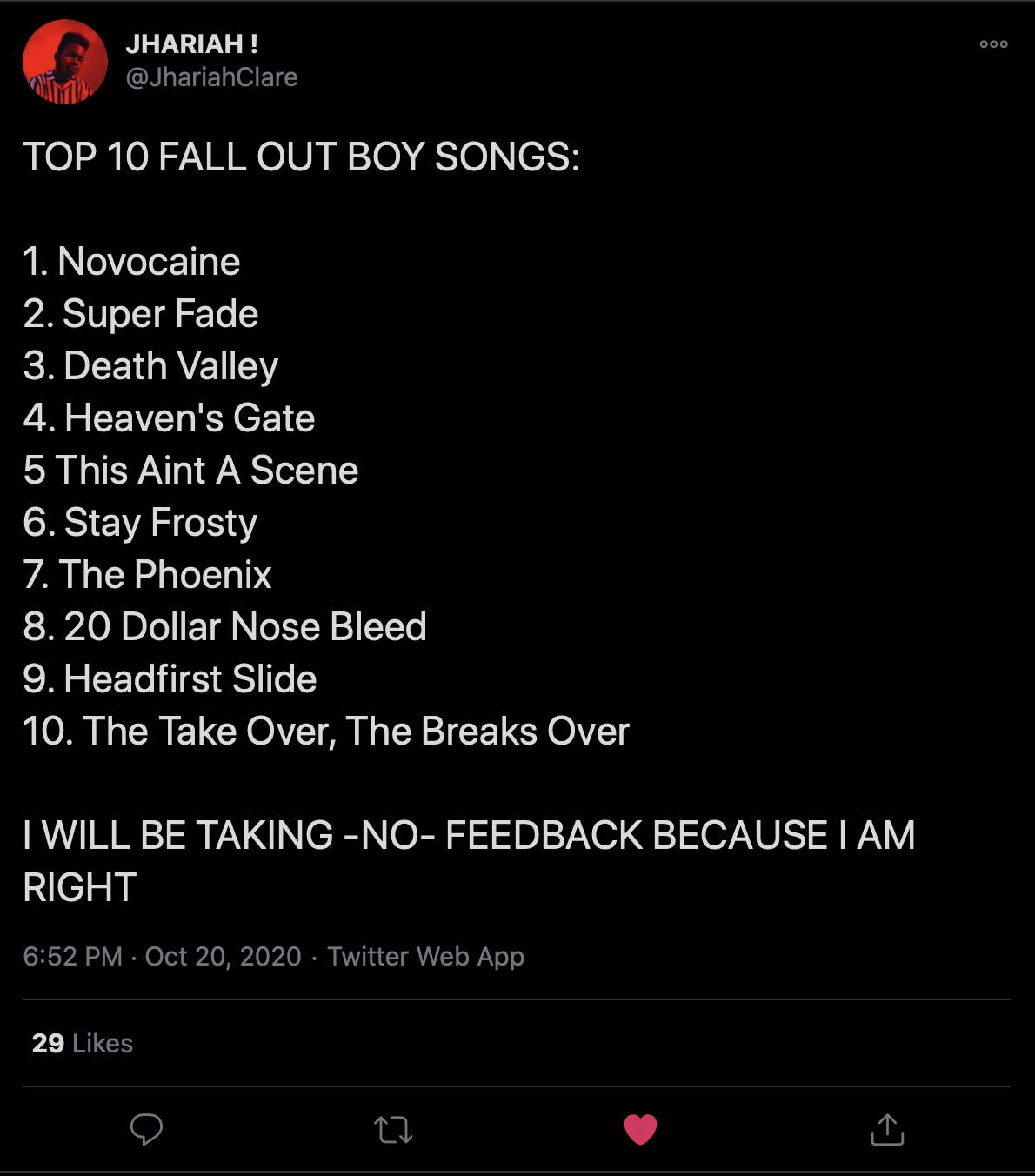 And while I respect Jhariah’s opinion, I had different feelings. Once I went to put all of Fall Out Boy’s official 111 songs, I realized something: Fall Out Boy’s early song titles are so fucking long and convoluted that I wouldn’t even be able to rank them all without relistening to them… all.

So after two days, I’ve come to my finalized list. This was an incredibly difficult journey, considering I only genuinely dislike maybe 7 songs out of Fall Out Boy’s discography. In all honesty, 20-60 are just more arbitrary because I fucking love Fall Out Boy so damn much and this intense re-listening reacquainted me with my love for them. My ranking is based on personal relation/nostalgia, what I would listen to over the song below it, and pure genius in lyricism or the music. Let’s go.

This is objectively the best Fall Out Boy song, by a mile. It begins the best album of theirs, also by far, and entered the stage of pure genius anarchy before their temporary break up. This album in general is lyrically fucking amazing, with my favorite from this song being “So boycott love, detox just to retox / And I’d promise you anything for another shot at life … / Nobody wants to hear you sing about tragedy”. For me, I listened to this album a while before I heard the album. This album and the songs are very special to me, and I think it’s still an enjoyable piece of work even if you don’t dive further into it.

You can shit on me all you want, but the new age Fall Out Boy albums are incredibly overlooked. I think the band has done an incredible job of keeping their sound while also pushing themselves slightly in different directions to slowly and seamlessly evolve. In my head, FOB’s discography is split into pre and post-breakup, MANIA being the most recent release in 2018. This song is fucking incredible. This is also the opener song of the album, and it should be. The drums and bassline in the beginning open up the album and song HEAVILY, with bits of guitar throughout that make my ears perk up. Lyrically, this song is the perfect pump up song. “I’m ’bout to go Tonya Harding on the whole world’s knee” and “The only thing that’s ever stopping me is me, hey!” are the standouts in my mind.

This song ranks so high for 2 reasons: the strings and the nostalgia. I cannot hear the line “I will never believe in anything again / Change will come, oh change will come” without sobbing. Objectively not a greatly poetic line, but the way it is sung, along with my personal ties to the song make it very impactful. The bass and vocal quality with the background strings make for a headphone experience like no other. As a song about worldly success, with a shockingly optimistic view (for how early on FOB this was), it speaks volumes to me.

#4 The Phoenix from Save Rock and Roll

Although this album was the first album of theirs that got me into Fall Out Boy, this album only had one top tenner, and that’s purely because I am just such a slut for Folie à Deux. The drums and the intensity of this song say it all. This is another opening song, as it should be. I think this is just proving they set the tone for their albums super well. This was also the first song back from hiatus (not the first single but-). They quite literally rose from the ashes, and it’s a fantastic come back song. Favorite lyrics include: “We are the jack-o-lanterns in July”; “I’m going to change you like a remix / Then I’ll raise you like a phoenix” and the extended “Hey” Patrick Stump sings at 3:10.

… I love this fucking album okay? Opening line: “Have you ever wanted to disappear?” Like yes bitch I have. This song also features my second favorite vocalist of all time, Brendon Urie from Panic! At The Disco. The whole song is actually much deeper than I ever knew; it’s about Benzos and the politics of the 90s. For me, it was always a song about being sick and refusing to get help. This song also ends with like a 30 second spoken word poem by the bassist/lyricist Pete Wentz that I and every other emo lets live in their head rent free.

Also loved this album, but surprisingly this is the only one that makes the top ten off of it. This is a killer song. Fall Out Boy has this incredible ability to add this heavy grungy sound in the back of their songs without making them all sound the same, and this song is no different. A lot of my top tens are just a: go listen. You’ll know what I mean when you hear it. “I’m just a problem that doesn’t want to be solved”, and “I will always land on you like a sucker punch / I am your worst nightmare”.

#7 What A Catch, Donnie from Folie à Deux

Last one I promise okay?? This had to make the top ten, because it quite literally includes all the other songs that should’ve made the top ten. It starts off slow, includes lyrics like: “I got troubled thoughts and the self-esteem to match / What a catch”; “They say the captain goes down with the ship / So when the world ends, will God go down with it?” The ending of this song is fucking iconic. It includes choruses of all of their hits, including “Grand Theft Autumn / Where Is Your Boy Tonight?”, “Sugar We’re Goin Down”, “Dance, Dance”, “This Ain’t A Scene, It’s A God Damn Arms Race”, “Thnks fr th Mmrs”, and “Growing Up”, sung by Gabe Saporta, Travie McCoy, Brendon Urie, Doug Neumann, Alex DeLeon, and William Beckett, respectively. God tier.

#8 This Ain’t A Scene, It’s An Arms Race from Infinity on High

Speaking of older songs, this is the second oldest song on the list oops. To disclaim I fucking loveeeeeeeeeee their first 3 albums, but I have a bigger attachment and just a little more love for the latter 4. That being said, this song is a banger and has remained one for almost a decade. The song is quite literally Pete Wentz making a commentary on how the emo scene is a war of popularity. The guitar riffs and again- just the heavy beats make it an intense song to listen to. Favorite lyrics include: “I am an arms dealer fitting you with / Weapons in the form of words / And don’t really care which side wins / Long as the room keeps singing, that’s just the business I’m in”.

Introducing the oldest song on the list- from one of their most iconic albums, and I’m including neither of the two most iconic songs. No offense to “Dance, Dance” and “Sugar We’re Goin Down”, they are fantastic songs, but the overuse of them kills them for me. This song is super meta- it’s a song about how making a sophomore record is hard to do after a successful debut. (Like shut up okay?) but the #1 reason this ranks so high is because it’s a bop, Pete Wentz screams in it, and this lyric: “The best part of “believe” is the “lie”.”

#10 Alpha Dog from Welcome to the New Administration Mixtape

This is a wrench to throw in at #10, I know. I didn’t know where tf this song came from until like ten minutes ago, truthfully, because I had heard it on Youtube and then their Greatest Hits CD. “Alpha Dog” comes from a mixtape released in 2009, and it’s killer and I’m so upset it’s not more widely known. The lyrics to the whole thing are punny and pointed, just like most of Fall Out Boy’s lyrics are (this is mainly why I love them so much). Truly, something I love about Fall Out Boy is that I don’t know what most of their songs mean to them, but I know what they mean to me. They are the most poetic band I know lyrically, with a greatly contrasting sound. Alpha Dog includes lyrics like “You’re not the first or the last / But you’re possibly the prettiest, whoa / He’s a fighter past his prime / He’s in the gutter waving his hand “I’m just fine””. The intro is sick and the whole song is about a Jekyll and Hyde juxtaposition- and I love it.

(My top ten were essentially the best songs, and the next ten are my guilty pleasures)

#11 Miss Missing You from Save Rock and Roll: “Sometimes before it gets better, the darkness gets bigger / The person that you’d take a bullet for is behind the trigger”

#12 Favorite Record from American Beauty/American Psycho: “You were the song stuck in my head / Every song that I’ve ever loved / Play it again and again and again / And you can get what you want but it’s never enough / And I spin for you like your favorite records used to”

#13 Headfirst Slide Into Cooperstown On A Bad Bet from Folie à Deux: “I don’t just want to be a footnote / In someone else’s happiness / Does your husband know the way that / The sunshine gleams from your wedding band?”

#14 Sunshine Riptide from MANIA: “I don’t even have my own attention / You say, “Please don’t ever change,” but you / Don’t like me the way I am, the sign says “Don’t you tap the Glass,” but I read it in reverse: “eht pat uoy t’nod syas ngis ehT””

#15 My Songs Know What You Did In The Dark (Light Em Up) from Save Rock and Roll: “A constellation of tears on your lashes / Burn everything you love then burn the ashes / In the end everything collides, my childhood / Spat back out the monster that you see”

#16 The Kids Aren’t Alright from American Beauty/American Psycho: “I’ll be yours / When it rains it pours / Stay thirsty like before”

#17 The Last Of The Real Ones from MANIA: “Write our names in the wet concrete / I wonder if your therapist knows / Everything about me”

#18 Chicago Is so Two Years Ago from Take This To Your Grave: “You want apologies, girl, you might hold your breath / Until your breathing stops forever, forever”

#19 Thnks fr th Mmrs from Infinity on High: “Been looking forward to the future / But my eyesight is going bad / And this crystal ball / It’s always cloudy except for / When you look into the past”

#20 America’s Suitehearts from Folie à Deux: “I must confess / I’m in love with my own sins”

To save you the time, if you want to see my full list here is the link.

PAX•AM Days was released directly after Save Rock and Roll, included as a deluxe version of the album actually. It’s an incredibly grungy and hardcore punk compilation of 7 songs, and I hate 5 out of the 7 of them. Just not my cup of tea. I’m almost glad they exist so I didn’t have to put any songs I actually liked in the last slots.

So there you have it: My humble but final opinion on the Ranking of all 111 Fall Out Boy songs. If you have any difference of opinion- kindly keep it to yourself. Be on the lookout for more of these… perhaps for the other two bands of the emo trinity… 😉

Check out my two playlists below, if you’d like to listen to all of FOB in order or in my ranking order.